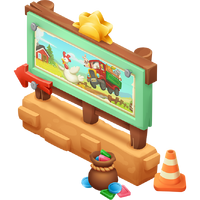 The valley is a game feature introduced at 24 June 2019 which gives players a new area to play in with other players (their neighbors and solo players) and the opportunity to gain tokens.

It is unlocked at level 25.

Going to the valley

The valley doesn't need coins or time to be unlocked at level 25. Players can go to the valley by tapping on the valley board when a season is ongoing. A season usually lasts about three weeks. If there is no poster on the board then the valley is unavailable.

Chicken can occasionally be found on the road. A chick will also appear when a group request is completed. Players need to collect chicken to complete some of the quests. Also, a total of 100 chicken needs to be collected by everyone in the valley before the season ends to unlock the exclusive valley shop. Players may get results by receiving tokens from filling requests or the mystery boxes from completing quests.

Sanctuary animals such as hippo and giraffe can occasionally be found on the road. They appear more frequently than chicken. An animal will also appear when a group request is completed. Players need to collect santuary animals to complete some of the quests. Also, a total of 300 sanctuary animals needs to be collected by everyone in the valley before the season ends to unlock the exclusive valley shop. Apart from the usual ways to get tokens, players may pick up sanctuary animals, at most three at a time, and deliver them to a sanctuary. After waiting for 25 minutes, players will get a huge amount of tokens. This way can give players more tokens than filling requests, and therefore more rewards.

Quest can be found on the bottom-light calendar button. Every day you get 4 quests. They can be completed by performing certain actions in valley, such as visit fish shop, visit diner, earn tokens, drive to a number of buildings or road stops. When you completed a certain number of quests, you get a Mystery Box or lucky bonus game, described below.

The Lucky Bonus game is achieved by completing Daily Quests.  You play by uncovering tiles which contain prizes or bombs.  The prizes you find are accumulated.  You can quit the game at any time and collect your prizes, or press your luck to win more prizes.  Finding a bomb will end the game and you will lose all of your prizes. You will be offered the option to retain your prizes and continue by spending diamonds.  The number of diamonds required begins at 10 and increased to 30, 60, and 90 as you hit more bombs.  It’s a freeroll, so best of luck!

There are three random events: truck breaking down, roadside surprise and animal escaped.

Your truck may break down in the meantime of travelling, it may happen after spending 50 fuel or so. When it breaks, it fails to arrive the destination and fuel won't be spent for the distance not travelled. It appears smoking and player needs to wait for 2 hours for the truck to be repaired automatically. To shorten the time, other players can help fix it and the fixer will be rewarded with random tokens.

The truck may stop in the meantime of travelling to surprise you by giving you random tokens or goods. After that, the truck will continue moving to arrive the destination and fuel will be spent.