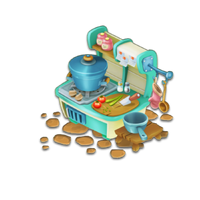 The Soup Kitchen is a production building unlocked at experience level 46.

The Soup Kitchen is a cyan stove with a blue pot and a vegetable cutter placed on it. Pots and pans are placed or hung near it. There are a couple of utensils hanging beside the stove.

The mastered version gains a golden tint on the stove and the rims of the pot. Steam comes out of the star-decorated pot on the stove.

) to build the Soup Kitchen. It gives players 28 xp

than the previous one. Alternatively, they can spend a total of 105 dia

to completely upgrade their machine.

A total of 1,512 hours of production is required to master the Soup Kitchen:

The appearance of the Soup Kitchen changed in September 2015. 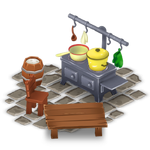 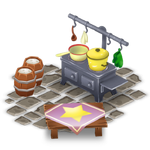 Retrieved from "https://hayday.fandom.com/wiki/Soup_Kitchen?oldid=95224"
Community content is available under CC-BY-SA unless otherwise noted.