Leaderboards are features which rank players globally. There are two leaderboards: one for boat points and one for derby points. High ranks do not confer any special benefits. 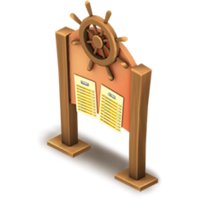 The boat leaderboard ranks players according to the number of boat points they have accumulated in total. Boat points are obtained by filling boat crates and sending complete shipment off as quickly as possible.

The board has two ranking lists: Global Top Player Ranking and Friends Ranking. When a friend passes a player on the boat order leaderboard, the user image of that friend is displayed on top of the leaderboard object.

The derby board ranks players according to the average number of league points neighborhoods competing in the Champions League have. Results are reset every four weeks.

Points are given according to four factors:

An example of the Friends Leaderboard

An example of the Global Leaderboard