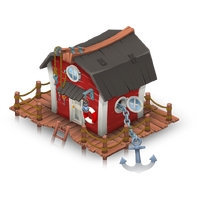 Fishing books (also called "scrapbooks") are photo collections of each type of fish the players have caught.

Players can see their scrapbooks and other players' by tapping on the fisherman's hut. 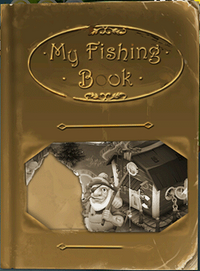 All fishing books appear to have the same cover, with a faded brown cover and a photo of Angus with a mysterious character (assumed to be the player's uncle). When the book is opened, the player can see two pages of the book each with two fish types. The player will not see photos for any fish they have not previously caught, however, he or she will be able to see both the photo and medals earned by catching the fish.

Adding a new photo to the book

When fishing with lures, every fish players catch is photographed and weighed:

In addition to the photo of the fish, the book also notes the types of lures (2 types at most) the fish can be caught with, and the weight of the player's biggest catch.

There are currently 43 different fish to collect. They appear in this order in the book:

Players will notice the picture of the fish in the scrapbook will be flashing if there is a reward to be collected.

Retrieved from "https://hayday.fandom.com/wiki/Fishing_Book?oldid=91732"
Community content is available under CC-BY-SA unless otherwise noted.