Be careful: You may experience some bugs while doing the Derby. Some tasks can be duplicated once you've finished them. The duplicate won't give you any points. Support recommends you trash it. Failed tasks can also appear to be still active in your log (no red cross, not grayed out). They're not. 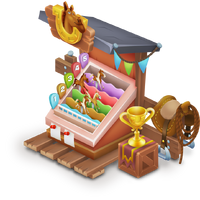 Derbies are limited events that occur in neighborhoods from experience level 18 onwards.

Every week, a derby (a horse race) starts between neighborhoods and give them the opportunity to win prizes. The derby stand unlocks as the player repairs the neighborhood house. 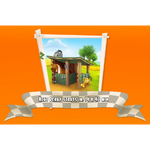 Derbies last 6 days, from 8am UTC on Tuesdays to 8am UTC on Mondays. During the 24-hour cool down period members can opt out, opt back in or participate in the next derby with a different neighborhood.

Leagues determine the number of tasks players can complete and, consequently, the number of rewards they can get. One extra task, purchased with 10 diamonds, is available in every league.

There are five leagues: 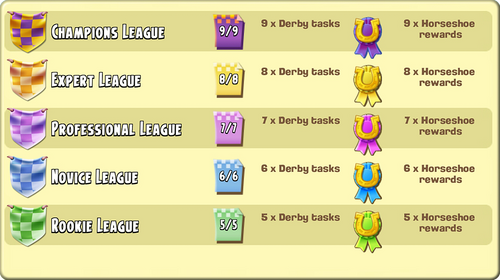 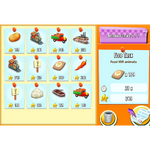 Completing a task gives players derby points. There are 12 different types of tasks.

Combo tasks (or basket tasks) are exactly the same types of tasks as mentioned above but less specific. For instance, instead of serving one type of town visitors 10 times, players will have to serve three types of visitors three times each. Depending on whether the original task is time-limited, the combo task will either be time-limited or not.

During mystery derbies, some tasks remain unknown until players pick them. 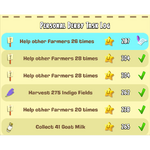 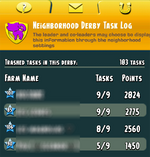 Each player can only choose one task at a time. Failing to complete a chosen task does not result in a penalty but still counts toward the player's task quota.

Neighborhood leaders, co-leaders, and elders can discard any non-selected task; a new task then replaces the discarded one 30 minutes later.

A player's list of completed or failed tasks is shown below the task board. 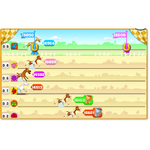 Derby points are won by completing tasks. Usually, tasks can give from 50 to 320 points. Players in higher leagues have more chances of getting high-value tasks on their boards (see the table below). During thematic derbies, some tasks can be worth up to 400 points.

When a neighborhood has reached a certain number of points - or flag, they win a horseshoe (see the table below).

Flags and points are displayed on the racetrack tab, which shows all neighborhood competing in the race.

Rewards are won by reaching horseshoes. Each horseshoe gives players the possibility to pick one reward out of three. Players who do not complete any tasks do not get any derby rewards.

During some thematic derbies, players can get better rewards or additional rewards.

Players can use the reshuffle button to try and win different rewards by spending 5 diamonds.

Players who did not complete at least one task during the derby cannot claim their rewards.

Reaching the end of the derby in first, second or third place within your league gives the neighborhood a gold, silver or bronze trophy and additional random rewards. During some thematic derbies, top 3 neighborhoods get exclusive rewards instead.

Neighborhoods finishing a race in the top three are promoted to a higher league for the next derby.

Neighborhoods ranking in the bottom three and neighborhoods which did not reach the first horseshoe checkpoint move down to a lower league.

Other neighborhoods stay in their current leagues.

When all neighborhood members have opted out of a derby, the neighborhood is automatically demoted to the lower league.

Top neighborhoods competing in the champions league are ranked in a global leaderboard. Scores are based on the neighborhood's average champion league points in the previous four weeks of competition. If a neighborhood is demoted to the expert league, they lose their leaderboard points.

Players can opt out of the derby, or opt back in, at any time by (un)checking the appropriate option in their settings.

Players who have been inactive for a while are automatically opted out. 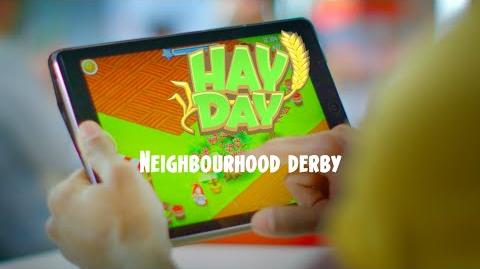 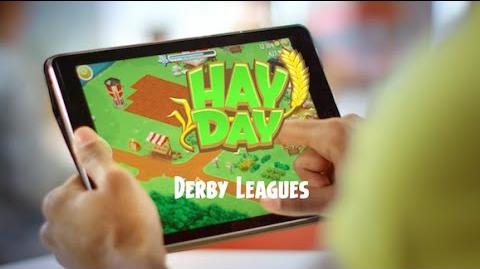 This table lists the number of derby points neighborhoods must reach in the Champoins League at each checkpoint according to their size.

Note: thresholds have been modified in the December 2018 update. Please be patient while we're collecting new numbers. In general you can expect thresholds to have gone up if you are in a 4-player hood or more, and down if you're in a hood with less than 4 players.